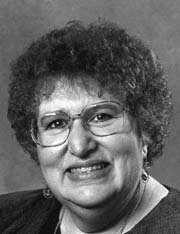 Lynne Goldstein is Professor and Chair of the Department of Anthropology at Michigan State University, where she has been since 1996. Prior to that time, she was Professor and Chair of Anthropology at the University of Wisconsin-Milwaukee. Goldstein is also Editor of American Antiquity, the quarterly journal published by the Society for American Archaeology; her term as Editor expires in 2000. She earned her BA in Anthropology from Beloit College in 1971, and her Ph.D. in Anthropology from Northwestern University in 1976. Dr. Goldstein has authored numerous books, monographs, and scientific articles on archaeological topics, and has served and continues to serve on various national advisory committees on behalf of archaeology. Goldstein has also been active in public education, including a weekly radio broadcast on Wisconsin Public Radio, special training sessions for teachers and kids, and two popular books. She has conducted field work in various places, but especially in Illinois, Wisconsin, and California. Dr. Goldstein is perhaps best known in California for her 1990-1992 excavations of the historic Russian Cemetery at Fort Ross.

Dr. Goldstein was the Awards Banquet Keynote Speaker at the 1998 SCA Annual Meeting in San Diego. This interview with Dr. Goldstein was made possible through the efforts of SCA members Breck Parkman and Kristina Roper.

SCA: When did you first become interested in archaeology?

LG: I have been interested in archaeology since I was a young kid. When I was about eight or nine years old, my sister (who was a college student at the University of Chicago at the time) was stuck entertaining me one day on campus. In desperation, she took me to the Oriental Institute. I was totally and completely captivated. In thinking back on the moment, I can’t really say what engaged me so completely, but I know that the idea of encountering all of these objects from such a totally different culture fascinated me. I told my sister she could leave me and that I would be happy staying there for the rest of the day. My recollection is that my sister happily abandoned me for a while, but this may not be completely true. I do recall that she purchased several books for me and that that day was when I decided that I would be an archaeologist.

In retrospect, what is perhaps most interesting is that no one ever tried to dissuade me when I told them I wanted to be an archaeologist. In fact, it wasn’t until I reached college that anyone suggested that a woman couldn’t be a proper archaeologist. An anthropology professor told me that women had to specialize in floral or faunal analyses because they were not suited to direct field operations. That pronouncement merely increased my resolve to become a field archaeologist, but that was the first time that anyone had raised the issue that archaeology would not be a grand career for me.

Once I decided that I wanted to become an archaeologist, I had the distinct problem of not knowing what to do with that decision. The opportunities open to preteens at that time were few and far between. I primarily focused my energies on reading and imagining, with a small side sojourn when a neighbor and I decided that we would dig to China. We excavated a fairly impressive hole in his backyard. I remember it as being seven or eight feet deep and perhaps four feet around, but perhaps it was only four or five feet deep. I also recall that his mother was furious, and that being forced to backfill was not fun.

Other than my attempt to reach China, I didn’t actually do any archaeology until I reached high school. At that time, the National Science Foundation was just beginning a series of summer programs to entice high school students into the sciences. I decided that an anthropology program scheduled for the Field Museum was the perfect opportunity for me. Little did I know that 200 other kids thought the same thing (the program had room for 20). One of the directors of the program was an archaeologist named Harriet Smith, who was a wonderful person and remained a good friend of mine until her death a few years ago. Harriet interviewed potential students for the program and asked me what it was that interested me about archaeology. I told her that I was fascinated by the kinds of things that people in the past had discovered how to do, all on their own. She asked me what I meant, and I said that an example would be glass. How did people figure out how to make glass, how to create different colors of glass, how to blow glass, and so on. It certainly isn’t obvious that sand can be used to make glass, and I found it incredible that people figured these things out. Harriet’s eyes lit up and she became quite animated. It turned out that she was a collector of glass and that it was one of the kinds of things that most excited her. Needless to say, I was accepted into the program. That first NSF set of high school programs was very well funded, and I got the opportunity to listen and participate in lectures and workshops by archaeologists like Jim Hill, and I also got the opportunity to excavate for a week with Stuart Struever. I loved every minute of it, in spite of the fact that my excavation partner was a Junior Miss Illinois who didn’t sweat, let alone get dirty. When the program was over, I remained convinced that I wanted to be an archaeologist, and I never looked back.

SCA: What do you enjoy most about archaeology?

LG: There are a lots of things that I enjoy. I have to admit that I love getting dirty, and I love the kind of physical tired that one experiences in the field. My husband suspected that my love of archaeology had to do with my being a frustrated farmer; he always observed that I seemed as interested and engaged with the landowners as with the sites themselves. While it is true that I have spent many years and thousands of hours with landowners and amateur archaeologists, it is really the subject matter itself that excites me. Never knowing what you might find remains exciting to me.

Archaeologists represent one of the few groups of scholars who immediately and enthusiastically acknowledge that their data sets are both limited and biased. We know we are only seeing a piece of what was, but we also know that there are many clues there and much information present. It’s all in how you put it together and the questions you ask. To my mind, archaeology represents a multidimensional puzzle with many, many solutions. The solutions vary according to the questions and the problems, as well as according to who asks the questions. Even though all of this ambiguity hovers over us, we can still usually sort through the mess and find some answers. More significantly to me, however, is the fact that we can evaluate our answers, and that we can judge between different alternatives. Depending on the questions and the context, there usually is one answer or a set of answers that is more appropriate and plausible.

I love the field work and I love the lab work, but I guess I’m saying that I really enjoy the puzzle solving most. Those farmers and amateur archaeologists aren’t bad either.

SCA: What can archaeology offer the future?

LG: For a number of years, I have been concerned about the fact that many in the general population and even those in power believe that there is little that the past can say about the present or the future. If it’s convenient, you save the past, but “big plans” should never give way to concerns about people who are no longer here. Of course, part of the answer to this problem addresses the whole issue of how archaeology is relevant, but I would like to place a bit less emphasis on that aspect of the issue here. I would instead argue that it is archaeology, and material culture generally, that provides the physical structure or frame for us to develop and maintain a true sense of place.

One of the problems of the present (and many fear of the future) is that everything is beginning to look alike. Shopping in one place is really no different than shopping in another, especially if you are in a mall. WalMart, Mc Donald’s, Holiday Inns, and other chain businesses convince us that “the best surprise is no surprise.” The problem with this view is not only that it is boring, but that it instills in people a sense that it’s good to have everything be the same, and that somehow we are all the same. While this is true on some levels, the fact of the matter is that we are also all different.

What archaeology and material culture can provide is a tangible sense of the past. When viewed through the lens of archaeology, the incredible variety and diversity of human cultures is celebrated. Places are different and they are different for a variety of complex reasons, but each place has a distinctive and interesting feel. If we begin to focus on what makes each place distinctive, we have a better chance of promoting economic development, loyalty and pride, and ties to the past and what people can and have learned.

Just like many other things that are important, the value of archaeology can’t be matched against keeping children from starving or finding a cure for cancer, but its potential for improving the quality of life now and in the future is immeasurable. I can’t believe that someone who lives in a lovingly restored home in a historic district with a rich history and prehistory doesn’t have a greater sense of well-being and sense of place than a person in a comparably priced tract home where the door has to be painted a distinctive color so you can find it. The sooner people understand how archaeology and history can combine to clarify a sense of place, the sooner we will all understand how to cope with and celebrate the diversity that makes the world an interesting and exciting place.