To advocate for the protection of maritime cultural resources, which includes prehistoric and historic resources in California’s lakes, rivers, reservoirs, and coastal areas through the continued developments in maritime archaeological method and theory; to provide a space for the exchange of ideas and collaboration between schools, government agencies, industry, and any other interested individual or party; to promote public outreach and awareness of maritime archaeology; to develop professional standards and guidelines for survey, testing, and research to hold maritime archaeological projects to the same standards as terrestrial archaeology; and to coordinate efforts that occur across California with the goal of sharing resources and expertise among colleagues.

CA Maritime Heritage News focuses on providing information on the various maritime projects happening around the state in an effort to draw attention toward key maritime issues that can shape the future of research and management. 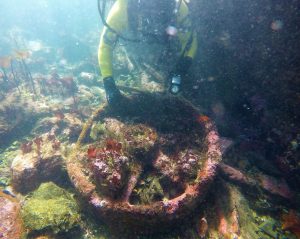 California State Parks (CSP) Maritime Heritage Program and statewide Dive Team investigated three areas of archaeological interest along the Mendocino coast during their annual training in October 2019. With help from local resident and California Department of Fish and Wildlife diver, Kevin Joe, Maritime Archaeologist, Sheli Smith, and retired Senior State Parks Archaeologist, John Foster, divers kicked off the fieldwork by conducting a condition assessment, including documentary video and still image data collection of key features of the 1850 Frolic shipwreck, situated just north of Point Cabrillo Light Station State Historic Park. Site record forms will be updated to include newly identified features and note changes in site condition. The Frolic (CA-MEN-1947H) is listed on the National Register of Historic Places (1991) and considered significant through its association with the California Gold Rush and the American-China trade. The research team also investigated a select sample of doghole ports that once dotted the rugged coastline, south of Fort Bragg including Caspar Headlands State Beach, Portuguese Beach at Mendocino Headlands State Park, and Van Damme State Park. The reconnaissance survey confirmed that these well-known historic sites have submerged components providing the needed evidence to plan for next steps in documentation.  CSP Maritime Heritage Program plans to conduct side scan sonar and magnetometer surveys of these submerged sites to define areas of interest for subsequent diver survey and recording efforts.

Over the past five years, the North Coast has experienced a rapid and dramatic decline in ocean health, specifically in nearshore kelp forest ecosystems. Changes include a regional shift from a lush and diverse kelp forest to a homogeneous, urchin barren. Submerged archaeological sites that once was obscured by thick kelp forests are now open and artifacts readily visible. While this greatly improves our ability to monitor existing and identify new sites, it also opens up opportunities for illicit collection.

SCHUNRS, a newly formed non-profit organization, dedicated to documenting submerged cultural heritage and public outreach, teams with University of California, Davis Bodega Marine Lab and CSP in the ongoing efforts to inventory maritime heritage throughout the Sonoma and Mendocino coast.  If you would like to help, contact info@nullSCHUNRS.org. 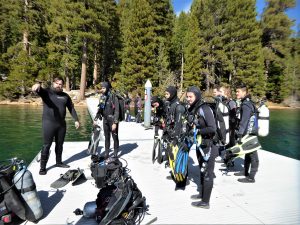 In Fall, 2018, the California State Parks Emerald Bay Maritime Heritage Trail (MHT) revealed the location of five submerged vessels in Lake Tahoe to an interested public. One year later, a joint team from University of Southern California (USC) and State Parks revisited these sites to collect digital data for condition assessment monitoring. These data were collected by divers associated with two field missions. First, in 2018, divers from Parks captured baseline data prior to the public opening of the MHT, while participants in an AAUS workshop jointly organized by University of California, Davis (UCD), USC and Parks documented the submerged boats a week after the public opening. Then, in October 2019, students with (or training to achieve) AAUS science diving certification at USC systematically documented these submerged boats again, one year after the trail’s opening, as a component of an experiential education course. These data were captured using portable UW cameras, processed using AgiSoft Metashape, and archived in multiple locations and media for future research use. CloudCompare and other tools allow assessment of changes during the inaugural year of the MHT and onward. The establishment of partnerships to facilitate gathering and curating longitudinal data sets is a model for sustainable monitoring other submerged parks properties.

During the early morning of Friday, January 13, 1917 the semi-armored cruiser USS Milwaukee (C-21) was forced ashore onto Samoa Beach near Humboldt Bay, California during a failed attempt to pull the submarine USS H-3 (SS-30) free of where it had earlier run aground.  Firmly imbedded in the sandy bottom, a crack began to form just behind the #3 funnel, dooming the ship. The Navy was quick to declare the Milwaukee a loss and began its salvage efforts, which included building a railroad trestle to the Milwaukee over the intertidal zone and the establishment of a salvage camp, informally known as “Camp Milwaukee.”  The Milwaukee would remain intact, undergoing multiple periods of salvage, until World War II when dynamite was used to remove what remained of the Milwaukee above the sediment.  Besides periodic looting, the site has remained mostly stable over the past 70 years.

During the minus tides in June 2019 archaeologists who work for the California Department of Transportation (Caltrans) conducted a pedestrian survey of the Milwaukee to record the remains of the vessel, the railroad trestle, and salvage camp.  Although conditions made it difficult to reach the Milwaukee, resulting in an incomplete survey of the exposed remains, 79 pylons were recorded and possible remains of Camp Milwaukee were identified.  A report and DPR 523 site record were completed to document the USS Milwaukee Disaster Site (CA-HUM1751H [P-12-003897]).  Copies of the report were submitted to the Naval History and Heritage Command (NHHC), California State Lands Commission, and the Northwest Information Center. 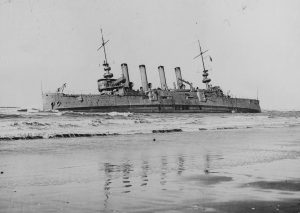 A construction crew working along a PG&E gas replacement project in Oakland discovered an anchor earlier this summer. The crew was excavating a trench along Embarcadero & 16th Avenue when the anchor was uncovered. Initially, it was believed that they had encountered a buried utility line, since only the midsection of the anchor was visible. However, upon removal the crew was surprised to find an anchor. Per PG&E’s policy the crew stopped work until an archaeologist could assess the discovery. Stantec had been monitoring this project and began researching the location, and determined that the anchor had been part of a floating pontoon wharf during the turn of the century, when the area was a tidal marsh. The anchor and associated wharf fragments were recorded by Stantec’s archaeological site monitor, Leven Kraushaar. 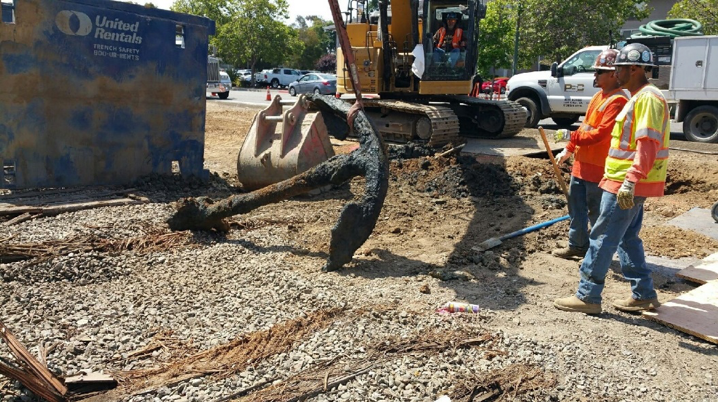 The Glenn Mayne, a tuna clipper turned recreational fishing barge, ran aground on a beach near Oceanside on July 14, 1939 after her anchor chain snapped. Before becoming a barge, the Glenn Mayne served many years as a commercial fishing boat in the Pacific Ocean between California/Hawaii and along the California Coast. It broke up along the beach and much of the ship was covered by sand. In February, locals noticed that a large portion of the Glenn Mayne was uncovered and the shipwreck was featured on the cover of a local magazine, bringing it to the attention of California State Parks. On Saturday, August 4, a team of archaeologists and divers from Parks’ Maritime Heritage Program visited and began documentation of the exposed portion of the shipwreck. Noted remains include several wooden futtocks, planking, and a machinery wheel. Because the site lies in the surf line of a shifting sandy beach, this winter was the first time the ship was exposed in several years. A DPR 523 site record will be submitted to the South Coastal Information Center to facilitate future identification/documentation efforts. 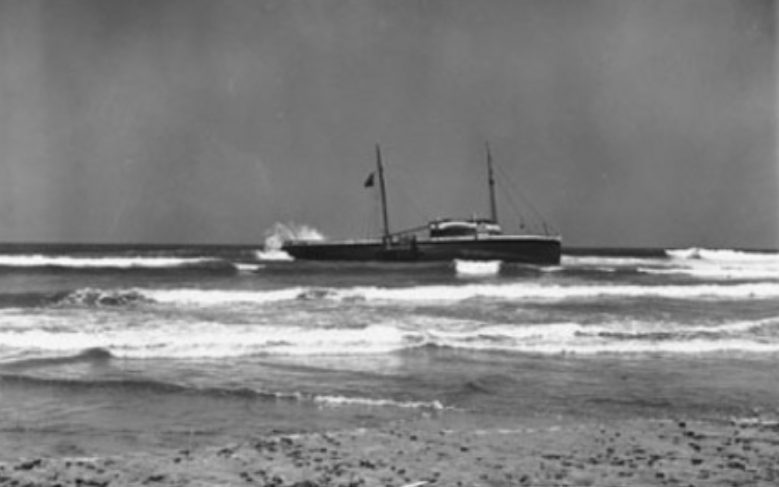 Pomona was built by the Union Iron Works at their Potrero Point facility on San Francisco Bay and launched in the summer of 1888. The steamship’s career spanned twenty years, a time of remarkable changes in the Pacific coastal trade economy. On March 8, 1908, S.S. Pomona struck a submerged pinnacle off Monterey Reef while en route from San Francisco to Eureka 12 miles north of Jenner, Sonoma County. Pomona became a serious navigational hazard to the smaller lumber schooners entering the Fort Ross Cove so explosives were used to further break apart and flatten what remained of the vessel.

As part of the Sonoma Coast Doghole Ports project (https://farallones.noaa.gov/heritage/doghole_fortross.html), the NOAA/California State Parks team wanted to test the application of computer-vision photogrammetry as a tool for comprehensive monitoring of the site. Divers swam transects over a portion of the site while taking top-down photos at 2-second intervals with a GoPro Hero 4 camera. The images were processed to correct-color, adjust white balance, and edit for clarity, sharpness, and feature definition. Edited images were then imported into the structure-from-motion photogrammetry software Agisoft Photoscan for image alignment and creation of 3D model and orthomosaic. The test proved incredibly successful and will permit routine rapid assessment in the future. We hope to return in summer 2018 to map the entire site.

Off the Pacific Coast of North America, rising postglacial sea levels have submerged a vast paleolandscape that almost certainly contains inundated terrestrial archaeological resources. It is likely that many of these areas are also associated now with important marine biological features. Few submerged sites have been identified and little ground-truthing has been done. 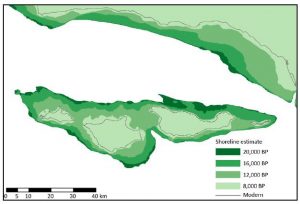 Reconstruction of shorelines of the Northern Channel Islands through time.

The Bureau of Ocean Energy Management (BOEM), in partnership with San Diego State University, as well as other academic and federal partners, is conducting a submerged landform study extending from southern California to central Oregon. This study will synthesize specific geological and geophysical data from offshore southern California and central Oregon, conduct field investigations, refine local sea-level models, and determine if these features are associated with ecologically sensitive areas (https://www.boem.gov/PC-14-04-Fact-Sheet/). The research group will survey and sample target areas based on archaeological and biological indicators. 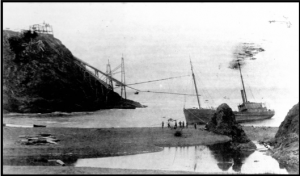 On June 7, 2017, a diver from the U.C. Davis Bodega Marine Laboratory found the bow section of a steam schooner that wrecked off the coast of Russian Gulch in August, 1892. The schooner, subsequently identified as Maggie Ross, was headed north from San Francisco when it struck a submerged rock near the former Russian outpost of Fort Ross. The vessel was built in 1878 at Pleasant Point, Oregon and measured 115 ft long by 32 feet wide with a 10-foot deep hold. The captain was able to beach the foundering vessel at the nearest “doghole” port, Russian Gulch, two miles north of the mouth of the Russian River. The steam wrecker, Whitelaw, was dispatched the following day in an attempt to retrieve the ship. Soon after arrival, Whitelaw realized that the steamer could not be saved and salvage operations began on the engine and cargo. Archaeologists from California State Parks and NOAA recorded the exposed vessel remains and conducted an intensive metal detector survey to locate additional elements in August 2017, but none were found.